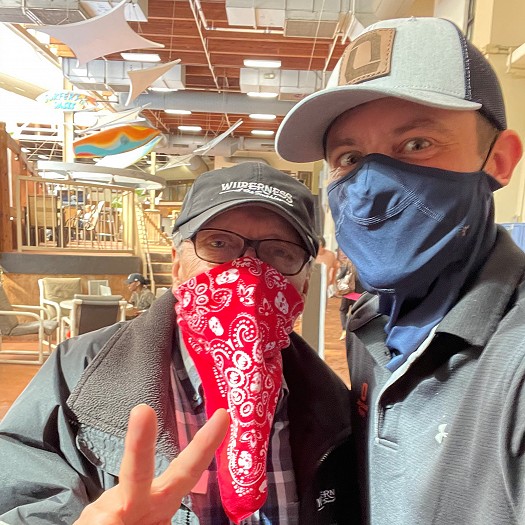 Tales from the road

In 2008, Haystack Dryers released the Cyclone Dryer in North America.  Wayne Jacks, US Operations Manager was on hand at the first US installation at Dollywood in Gattlinburg TN, and met a critical component of the park, Joey Bird.  Joey was, one of the park maintenance team who had been at Dollywood for over 20 years.

Wayne would regulalry check in with Joey when visiting the park.  “I tend to deal with operations and management personnel at the parks.  When traveling across North America, I rarely have the time to catch up with everyone I have met at each facility.  I knew on the day that I first met Joey that he was one-of-a-kind and I always carved extra time into my schedule to seek out the ‘old timer’ and have a chat about the park, family, life, and anything else that may pop up.  It was always such a pleasure to see such a friendly face, and I was a little sad when I had heard Joey had retired” said Wayne.

13 years later,  Wayne was travelling aacross the US to perform annual maintenance on the dryer fleet to assist the engineering team.   Halfway through the works at the Wilderness Resort in Sevierville, an old friendly face appeared, his beaming smile evident from under his facemask.  “It was such a thrill to see Joey again and at a totally different property.  It turns out he had retired from Dollywood and after some time off, had taken a part time position at the waterpark resort, slowly morphing into a full time role again” said Wayne.

“Meeting people and making connections in this industry is by far the best part of the job.  I have always known that once you are in the attractions industry, its rare to leave it completely.  You never meet someone once.  I bump into people on a daily basis that have changed company, state, country, or even sector; but to see such a memorable person who I thought had long retired and would be off on a beach somewhere sipping on whiskey was such a boost and a joy, and a moment I wont forget”.

Click here to find out more about our UK based company

Find out more about our range of body dryers

Read about the latest projects and developments